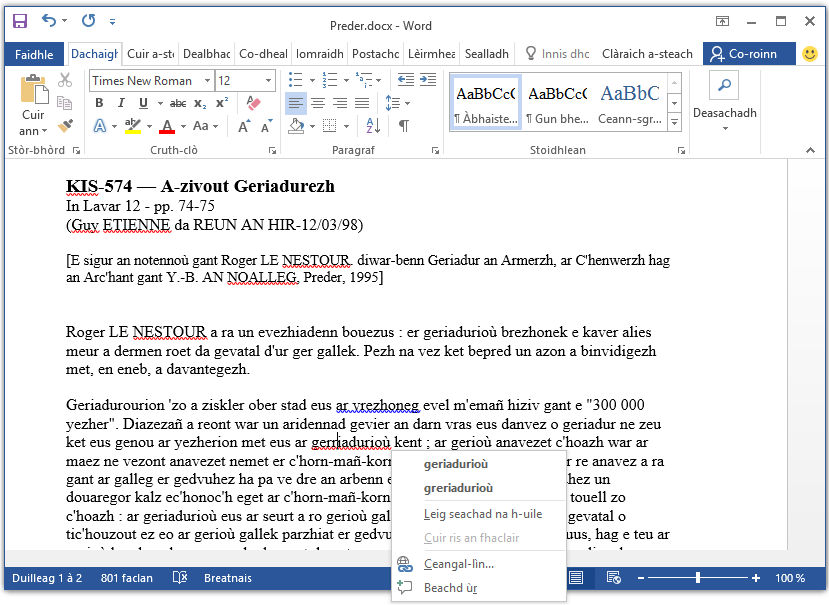 A Breton grammar and spell checker for Microsoft Office 2007

Office 2007 users can now download a free spell and grammar checker for Breton at http://www.drouizig.org. With a dictionary of 60,000 lemmas representing 1.5 million of inflected forms, this checker, developed by a group of volunteers which promotes the Breton language, is added to the list of tools demanded by all those who are sensitive to the defense of "lesser" languages.

I spoke here of the launch of a Romansh spellchecker few months ago. Franck also reminds us that the Office 2007 interface has been recently translated into Alsatian. Regional languages, endangered languages, languages of lesser diffusion... all these concepts often overlap and new technologies can help preserve this linguistic heritage. I am pleased to see that communities play their part. By putting all of ours, we may be able to stem the erosion of these languages. I will come back soon ...

A Breton grammar and spell checker for Microsoft Office 2013

The An Drouizig Team is pleased to announce a new release of its spellchecker. This new version is suited for the Microsoft Office Suite 2013, recently available for download, in preview, from the Microsoft website, and whose public release is scheduled for the first quarter of 2013.

Respecting the unified standard, this version also takes into account five hundred new lexicals, mostly taken from Breton dialects and modern vocabulary. With a dictionary of 60,000 words representing 1.6 million of inflected forms, the spell checker now covers all levels of use of Breton. The software is also provided with an hyphenator and a grammar parser, whose main purpose is to detect the mutation errors.

These tools also fit perfectly in the Office suite. Tested in-depth with the analysis of a language corpus of 20 million words, the program offers today a comprehensive recognition of derived forms of Breton. The software is therefore intended as an educational tool, useful to learners, but also essential for all those who write in Breton everyday, teachers, journalists, entertainers...

As of December 2020 it is possible to download a full package that embeds the lastest version of the Breton spellchecker for all Microsoft Office versions. This package includes an installer that will identify your version of Microsoft Office and therefore will suggest the installation of the right package.